Deadlifts are one exercise that gave me the fear.

When I joined the gym back in July 2011, the guys looked after me and told me to do the same basic exercises for at least 6 weeks to let my body get used to the new challenges, I didn’t listen.

I was a noob back then and wanted to do everything all at once. I caught a guy doing hyper extensions on the bench and tried to do the same. I didn’t realise my back was very weak and I ended up pulling my lower back which put me in agonising pain for 2 weeks. It hurt me to wiggle my toe and the doctor advised me to walk! This pain was something I never wanted to witness again and so The Deadlifts Fear kicked in.

The guys told me that I need to strengthen my back and to do so, deadlift. I’m not going to lie, I was scared. I was petrified of pulling my back again, so I took it very easy and light for 6 months.

One evening, I had a little challenge with my mate, everyone was watching, but I was scared. I still had a go, but ended up giving up at 100kg, he beat me by 5kg.

The next few months I went from hating Deadlifts to giving 100%. Over the next 6 months I added an extra 85kg on top of the 100kg and counting. I now find this one of my favourite compound exercises out there. Not just for the full body workout, but because I managed to fight past the hate for them.

Picture 1 – Back straight, looking up, ass on floor. The idea is to keep the bar close to your shin and pull up.

Picture 2 – At the top your chest should be out. 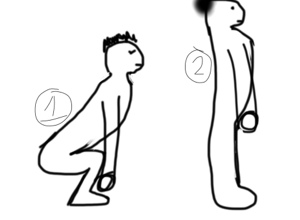 Tonight was bad! I was warmed up and tried 160kg, which I did comfortably last week without straps. This week I was lifting it and I felt my right hand slip slightly, this was enough to twinge my back. After that I basically gave up.

I did 3 sets of very light 50kg front squats, 4 sets of calf raises and went home.

I will get over this, it will just take time.

No pain, no gain… I should be a world class bodybuilder by now. 😛