People who are familiar with my blog will know the name Dr Zak from my goings on about protein bread and also the upcoming protein pasta. These are just two of the fantastic inventions from the Dr Zaks range that I personally love!

I was looking for Zak Pallikaros’ DVD online and I was about to import it from the US, just before I clicked confirm on the order, I asked him if there was a place in the UK I could buy it as it saves the hassle of any import duty etc. He asked me where I live and so I told him, he then sent me a copy of his DVD the next day and wrote a message on the sleeve saying, ‘To my friend George, Thank’s for your support, “train hard get HUGE”, Zak!’ I was overwhelmed reading this as I simply wasn’t expecting this at all.

Everyone that reads my blog, follows me on Twitter, facebook or anywhere else knows how much of a passion I (and the wife) have for Bodybuilding. I am trying to gain as much knowledge as I can from anywhere possible and having Zak do this for me is incredible! If you ever read this Zak, I want you to know that I appreciate it from the bottom of my heart and I will cherish it for life and so will my children!

I wasn’t sure what to expect from the DVD apart from seeing Zak showing his techniques and sharing inspiration as well as his accomplishments in the world of Bodybuilding.

It started off with a few words thanking people and then Jay Cutler congratulating Zak on the DVD and thanking him for being a supporter of his. I realised straight away that the DVD was going to be a personal approach to Zak and his life, as well as seeing him hitting the gym hard. I really love seeing the athletes in the everyday world and this DVD definitely shows the humble side of Zak. I got to witness some warming moments with his family, some comical remarks in and out the gym and plenty of muscle building.

The first part of the DVD is with Dorian Yates in Temple Gym. Again, my followers know how much I look up to Dorian and that we visited Temple Gym as a family on fathers day a month or so ago. Seeing Zak training in the worlds most hardcore gym and knowing me, my wife and three children have all been there is very special. My children recognised the the gym on the DVD and so this is another reason the DVD is not just special to me, but special to all of us! It also gave me a good opportunity to explain to the children about Zak and how he hasn’t just built muscle, but how he has also created nutritious foods such as the bread taking up most the freezer and cupboard. (A bonding with my children discussing Bodybuilding)

I’m trying no to talk to much about the DVD, even though I really want to. The DVD shows Zak outside the gym with his Osteopath, part of his wedding, how he prepares his meals and even him getting his tattoo. This DVD is quite a personal approach to his life and being a father myself, I feel that he has made this DVD with his children in mind which I relate to also. (The meal preparation has taught me a lot with nutrition within just a few minutes alone)

I loved every moment of this DVD from the heart felt words at the beginning, right up to him showing us his DVD collection. Zak is so humble that I can tell he is also over whelmed with where he is now and the company he shares his success with. When he was showing his DVD of Jay Cutler and saying how special it is to him, I know he understands how special this DVD is to us!

The more I look at Bodybuilding, the more I realise how close the athletes are. I look at it like one big family where everyone knows everyone and they all treat each other with respect. Not just each other though, they also treat everyone else with equal respect. (Granted they don’t have the time to spend hours talking to one person, but believe they would stop what they are doing to say hello to you if you bumped into them in the street)

Just before I go to bed I want to share some of Zaks success here; 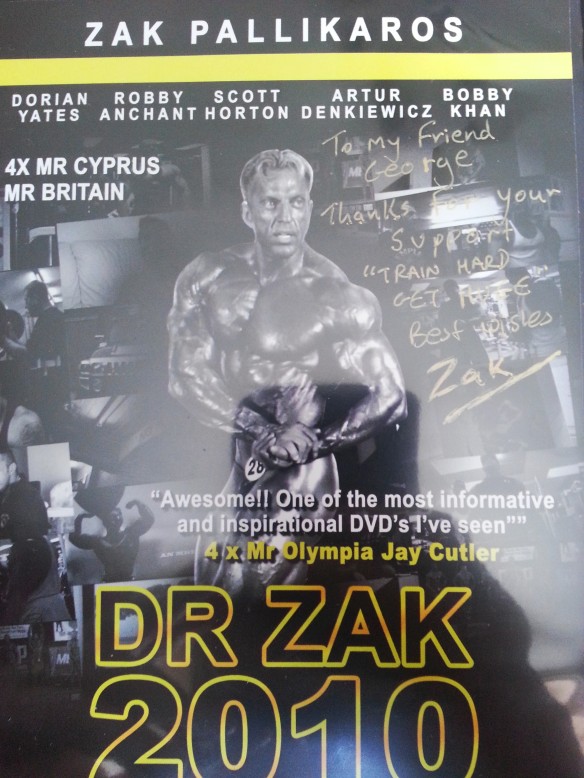 Everyday is a piece or knowledge that will lead to success…